Original character
V-Dub is an alter-ego created by Vinny to parody both stereotypical gamers who only play FPS games, and a person who hijacked Joel's stream during the time of V-Dub's creation. He wears a pair of aviators and claims to be a former marine who only likes to schüt.

Whenever he is not streaming V-Dub is locked away in Vinny's spider room, which apparently has a high rate of critters dwelling.[1]

On November 14th 2020, V-Dub addressed a rumor that Vinny had found his skeleton in the spider room. V-Dub claims to have been abducted and cloned by aliens of the Zarthrobian species. This clone took V-Dub's place in the spider room, who later died.[2] As a result of the cloning process, V-Dub gained the ability to telepathically communicate with the alien species, which can create interference with his ability to gain kill streaks in Call of Duty.[3] 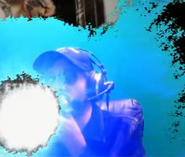 V-Dub vapes into the next dimension 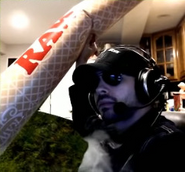