The Blue Shell Incident is an animated film created by Joel in 3D Movie Maker. The film was produced sporadically over a year, and was one of Joel's first attempts at film making.

When Luigi's brother Mario reveals a dark secret, Luigi must rise up with the help of an unlikely ally to stop his brother once and for all.

The film begins with Luigi drowning his sorrows in "Spaghetti on the rocks", only to be interrupted by his older brother's rude entrance. Luigi is surprised to see his brother, thinking the latter died in Zanzibar. Mario reveals the "Blue Shell Incident" was just a cover-up.

The film then cuts to a flashback of the supposed Blue Shell Incident, which features Mario and Luigi walking through an amusement park. Lasagna Ocelot, the alter ego of Garfield, stalks the duo and contacts a mysterious figure that "Operation Blue Shell Kill" is about to commence. He attempts to assassinate Luigi with his gun just as Mario ominously informs Luigi that he will go to hell before he dies. However, due to Lasagna Ocelot's laziness and it being a Monday, Lasagna misses the shot and it hits Mario instead. The cat retreats via a helicopter, seemingly out of ammo and is seemingly blown up by colliding into a random Toad in the sky. Luigi, upset over his brother's death, screams so loudly it can be heard in space.

It then cuts back to present day, where, through a series of pasta-related puns, Mario reveals he was faking his death all along and that it was his intention to kill Luigi. Grabbing his own gun, Mario intends to finish the job. A gunshot is heard and the screen cuts to black, only to reveal the gunshot was not fired by Mario, but by a new character: Duck Nukem. Duck Nukem reveals he witnessed the attempted assassination of Luigi and attempts to shoot Mario. Mario dodges, however, and the shot hits the Toad barkeep instead. Mario asks Nukem who sent him, but Duck Nukem's voice is replaced with unintelligble duck noises at the end, keeping it a mystery for both brothers.

Duck Nukem attempts to shoot Mario several times, but misses all his shots and empties his ammo. Mario makes a hasty escape through the window. Duck Nukem reveals he is on Luigi's side because Luigi fed him breadcrumbs when he was a duckling and because he thinks what Mario tried to do is despicable. The two chase Mario through a lengthy car chase scene. Mario slips on a banana and crashes into a restaurant, his body being flung through the window. Luigi tells Duck that he sees him as his true brother and that after they defeat Mario, Luigi will treat Duck to some spaghetti on the rocks.

Inside the restaurant, Mario attempts to distract Duck and Luigi by pretending to be "Hand-io". When that doesn't work, Mario is asked why he did all this. He reveals he was secretly Scatman John all along before firing at Duck and Luigi with a gun. Luigi flees the restaurant and escapes through a warp pipe while Duck Nukem hides in the restaurant. The Scatman John reveal turns out to be a fake-out, Scatman merely disguising himself as Mario while the latter was using the bathroom. Mario then shoots Scatman. Lasagna Ocelot's helicopter crashes near the restaurant and Lasagna enters, greeting his boss Mario. Considering operation Blue Shell Kill was unsuccesful, Mario resorts to his secret weapon: Metal Gear McQueen.

Much to the terror of the townsfolk, a giant Lightning McQueen with legs is summoned. Entering the secret weapon, Mario and Lasagna Ocelot wreak havoc on town while Duck Nukem stands on one of the robot's feet. Meanwhile, Luigi comes out of hiding and is terrified at the sight of the secret weapon. With Duck still on McQueen, Lasagna Ocelot asks why they're killing Luigi. Through a flashback, it is revealed that on a round of Mario Kart, Luigi hit Mario with a Blue Shell, causing the plumber to come in last place. When Lasagna reveals Luigi pissed in Mario's Cheerios, Mario challenges Luigi to a final fight. Duck Nukem, determined to stop the technological terror, grabs an RPG and shoots it at point-blank range. Metal Gear McQueen is destroyed, but Mario lives.

As expected, the rocket blast killed Duck Nukem. Luigi almost doesn't cry, but upon seeing a single feather float down, he screams out Duck's name. Mocking his sad brother, Mario uses a Super Mushroom and becomes a giant. Using Duck's feather like a Cape Feather, Luigi grows a cape and fights Mario. Luigi is victorious and Mario shrinks down to his normal size. Mario sneaks up on Luigi and monologues about memes, much to Luigi's confusion. Mario reveals he always hated Luigi and the two fight once more. Again, Luigi wins, but Mario scoffs and uses a cheat code to spawn in a Star. Gloating to Luigi,he is suddenly stabbed with a shovel by Duck Nukem. Duck thanks Luigi for their time together and dissapears again.

The movie ends with Luigi in the same bar as the start of the movie, once again having spaghetti on the rocks. However, since the bartender is Donald Duck, Luigi is reminded of his dearly departed friend and allows the bartender to keep the change. With DK, he drives off into the sunset, saying that he is Luigi, number one.

After the credits roll, a call between Lasagna Ocelot and a mysterious figure can be heard. According to Lasagna, the operation was a success. We hear about a mysterious old man who "doesn't know yet" and a third Mario Brother that needs to be found for mysterious reasons. As Garfield ends the call, he reveals his boss is none other than Scatman John, who survived being shot by Mario. The movie then ends on a cliffhanger. 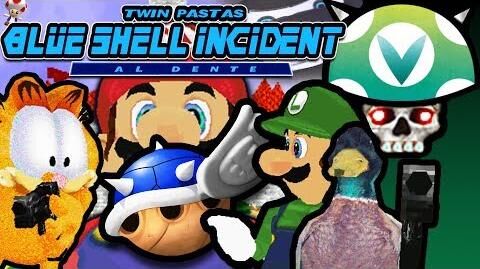