You may have realized that the Mario universe is very happy. This is due to Sponge, an orange plumber with an even bigger moustache than Mario or Luigi, soaks up all the sadness in the world, making him depressed. Not helping his mood disorder is the fact that no one cares about him, even his own brothers.

One day Vinny was playing the game Super Mario 3D World on stream, when he realized everything in the game was too happy, so he came up with a new orange and teal Mario brother named Sponge, who would use his mustache to fight enemies. A viewer by the name of nasnumbers came up with a backstory for the character: In which he was a forgotten Mario brother who used his mustache to soak up all depression, this explaining how the Mario games are so happy and colorful. He grew an immense fan following after he was added to the growing roster of Mii's in Vinny's Tomodachi Life Series. This newfound fame led to subsequent appearances in two fan games, a mod, and the stream of the sequel; Miitopia.

When Sponge entered Tomodachi Life, Vinny gave him an empty apartment. Sponge liked it. Every time that Sponge tries to get a sweetheart, he is turned down. Despite this, he constantly tries to get a romantic partner.

In honor of the passing of real-life singer David Bowie, Vinny decided either to remove or leave David's Mii from Vineland Island. After a strawpoll was conducted, Vinny removed his Mii from the island. Sponge's only friend was gone forever. Right after his removal, Clown Lady confessed her love for Sponge and became his girlfriend.

One day, Vinny got a rom from an unnamed man. The rom was a hack of Super Mario Bros., called Super Sponge Bros. The game is about Sponge going through a sad Mushroom Kingdom to save the princess by getting sad mushrooms and ninjastars. At the end of the game, the princess is already dead because Sponge was too late.

This mod features Sponge in the place of Mario in a re-textured version of Super Mario Galaxy.

Sponge is the first partner added in Vinny's playthrough of the Miitopia demo, and is carried over into the full game. He is given the Cleric class, and saves Vinesauce from some butterflies. He seems to hate almost every food in the game. Vinny describes him as "cautious".

Sponge appears as the protagonist of the ROM hack, initially setting out to find more meat before going though several nonsensical situations before ultimately defeating a monstrous version of Meat

Sponge as he appears in Super Mario Galaxy: Repainted

A photograph of Sponge and his Brother, Pretzel

The QR code for Sponge's Mii 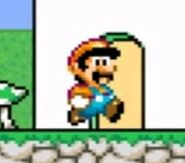 Sponge as he appears in Mario's Mystery Meat

Did You Know Vinesauce - Sponge