Mario is the eponymous character of the Mario franchise, and the mascot of Nintendo. He is depicted as a short Italian plumber who resides in the Mushroom Kingdom, taking part in adventures to rescue Princess Peach from the Koopa villain Bowser. His brother and sidekick is Luigi.

Vinny's depictions of Mario are more mature and darker; he is often portrayed as a bitter and ill-tempered middle-aged Italian-American plumber, whose personality contrasts with his naive brother Luigi. He resides in Brooklyn with his brother. Vinny's Mario also suffers from a serious brain condition called Terminal 7. He is probably depicted more accurately as Lou Albano than Nintendo's kid-friendly persona.

In Joel's streams of The Sims 3, Mario is depicted having an incestuous relationship with Luigi.

Other than Luigi, Mario has many more clones and brothers:

Just me on a Monday.

Luigi, I don't feel so good! 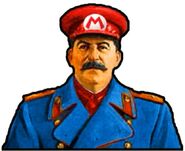 Comrade Mario has arrived to purge the Koopa Kulaks!