Lamb Chop is a resident of Vineland Island.

Bowling is one of Lamb Chop's favorite pastimes. She states that, instead of expressing her feelings, she prefers to bowl.

Lamb Chop is a sheep based on Shari Lewis's Lamb Chop from Lamb Chop's Play-Along.

Lamb Chop arrives late in the afternoon and becomes friends with the 30-something down the hall before settling down for the night. She is visited by the girl with two faces, who tries to hit it off, but Lamb Chop isn't interested.

Lamb Chop makes her debut in Vinesauce Miitopia in episode 3, where she is the Princess of Greenhorne and the daughter of the obese King SpongeBob. She is in love with her childhood friend Karl Pilkington but she has been arranged to marry the arrogant Prince Groose of Neksdor. 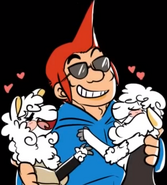