BonziBUDDY is the mascot character of a computer program of the same name. The computer program appears as a helper that can interact with the user, from telling jokes and asking questions to doing searches and helping with files. The program is most well-known for actually being a malicious spyware program that can install viruses on the user's computer and cause the computer to become infected with multiple unwanted programs and various problems, including changing their browser without consent.

The program contained a backdoor exploit known as a Trojan that was meant to allow it to perform certain tasks but created a vulnerability that allowed viruses and spyware to being installed on the user's computer, circumventing any malware protection or other security the computer might have. As Joel first attempted to download the BonziBUDDY program, a window popped up which then redirected to a rogue pornographic website, which possibly could have had malware as well. BonziBUDDY later appeared in Joel's Windows 7 Destruction Stream, as well as being a key component in the VineMEMZ and Bonzify viruses coded for Joel's Windows 10 and Windows Vista Destruction streams by Leurak, the user behind the MEMZ virus that Joel showcased in his Windows 10 Destruction stream.

As a result of multiple claims of the program being adware and spyware, Bonzi Software was involved in legal trouble and discontinued the Bonzi program, while still keeping the webpage up. The original webpage was shut down in 2008 but is still available on mirror sites.

BonziBUDDY, the purple monkey f**k we all know him for. 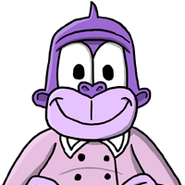 Art of BonziBUDDY in "Tomodachi Life" by Fretless. 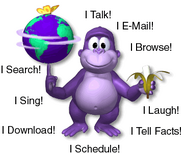 "Nice to meet you, Expand Dong!"