Alpaca is an alpaca from the pro-furry dating sim Vinny played called Paca Plus, before mostly gaining popularity when she was added to Vineland Island (Tomodachi Life). Though a softie, she has an addiction to cocaine.

Alpaca was later added to Vinny's Miitopia series as a princess class.

Alpaca was a resident Mii in Vineland Island, and during the series, she was in several relationships over time, including her marriage with Bonzi Buddy before he was evicted.

Alpaca is a Princess character who gets in a rather close relationship with Cling On. Many fans dub their ship as "Clingpacagon". 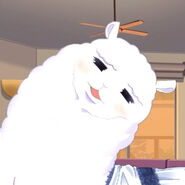 The original Alpaca from Paca Plus